If you're looking for a no-strings-attached hook-up, Adam4Adam is the site for you. This website isn't focused so much on long-term dating as it is on quick, steamy encounters, and that's reflected in the site's features and design. Everything about Adam4Adam is upfront and straight to the point -- from the ultra-quick registration process to the rapid-fire conversations you'll no doubt get into once you make use of the available communication options. You'll also get ready access to live cams from other members, as well as ads from professionals if that's more your speed. Unfortunately, requesting for support isn't quite as quick or easy, and while the site has ramped up its security measures recently, it's still got a history of security issues that you might find troubling. Still, if you're searching for your next tryst, Adam4Adam can definitely help you out. 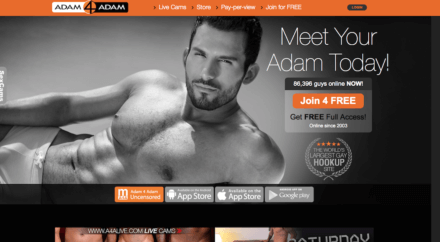 Unlike many of its competitors, Adam4Adam doesn’t bother with tiered membership and paid subscriptions. Instead, you get full access to all of the site’s features, free of charge. That goes for the features available on the iOS and Android mobile apps as well.

Adam4Adam isn’t exactly a dating site. It leaves the issue of long-term matchmaking to other websites, instead opting to help you arrange steamy hook-ups in the quickest and most effective way. At Adam4Adam, relationships don’t come with strings attached, and you can build and discard connections as quickly as you can click your mouse.

In fact, creating your profile takes hardly any time at all. Instead of extensive personality assessments requiring you to answer hundreds of questions, you’ll need to answer four. That’s right: four questions, plus whatever other information (e.g., interests, a brief biography) you feel like including for the benefit of other users. You’ll also need to verify your email address before Adam4Adam finalizes your registration.

There’s also an option to create visitor profiles for other areas, which is great if you happen to be visiting and want to check out the local community.

Matches and searches are equally simple. As with the rest of the Adam4Adam site, everything’s pared down to the basics. You won’t get automatic matches determined through complicated compatibility algorithms, so you’ll admittedly have to put in some elbow grease and run your own searches.

Adam4Adam features a direct messaging system that lets you connect with other users on the site. You can send text, photos, and even your location if you feel comfortable giving that out to your contact. If you’re using the iOS or Android mobile apps, you can save any photos that other users attach to the messages they send you.

Since Adam4Adam is unabashedly a hook-up site, expect most exchanges to be pretty forward, or even graphic. This site doesn’t beat around the bush, and neither do many of its users.

Aside from the messaging system, Adam4Adam also lets you view or even set up live cams for the rest of the site’s members. When you register, you get free viewing credits, which you can replenish by purchasing more from the site.

When it comes to health-related safety, Adam4Adam has your back with a collection of comprehensive resources on STDs and sexual health in general. You’ll find links to LGBT-specific health organizations, STD clinics, and even local helplines.

If you’re worried about the ability to save photos on the Adam4Adam mobile apps, then you’ll be happy to know that you can also toggle privacy settings for all of your photos. By setting certain photos as “private,” you’ll have complete control over who can view these, since you’ll have to manually “unlock” these photos for other users in order to make them available for viewing. Unfortunately, this doesn’t apply to any photos you send through direct message, so it’s best to exercise good judgment when communicating directly with others.

If you do run into trouble during one-on-one conversations, you have the option to block and report abusive users or offensive behavior through Adam4Adam’s dedicated contact forms.

All that said, it’s worth noting that in the early 2000s, many Adam4Adam profiles were used to out members who served in the US military, with some site profiles even being used as evidence for investigations into the service members concerned. Sometime later, Adam4Adam also made the news when the site was used to lure members based in Washington, DC or New York City to unsafe places where they could be robbed and murdered.

Adam4Adam has since tightened its security policies, mostly by introducing profile verification protocols to root out fake accounts. Despite these measures, though, the site still has a fair number of fake profiles, so proceed at your own risk.

Adam4Adam has a short FAQ section that covers most of the basics. If you need more specific support, you can send an inquiry to the site’s support staff through email or an online contact form.

If you’re looking for zero-commitment flings rather than long-term relationships, then Adam4Adam might be the site for you. With a streamlined registration process and an overall site structure that cuts out the bloat of extra bells and whistles, you can get right down to chatting up prospects who catch your eye. It’s worth noting that content can get pretty graphic, and given the site’s history of security issues, you might want to proceed with caution. Still, if you’re looking for a quick score, Adam4Adam can definitely help you out.

What's the Verdict on Adam4Adam?

Worth It, Some Issues
Other products in this category