Amazon’s Kindle eBook readers have successfully dominated the eReading market for years. Their latest one yet—the premium Kindle Oasis—is sure to please anyone with its ergonomic grip, page turn buttons, and its beautiful charging cover that provides extra juice. Unfortunately, it is the most expensive Kindle to date, despite not offering any significant leaps in terms of the reading experience compared to its cheaper siblings. It’s not a terrible eReader by any stretch of the imagination (in fact, it's great), but its prohibitive pricing makes Amazon’s own Kindle Paperwhite the more realistic option in comparison. 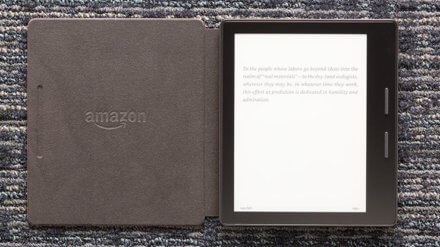 Amazon’s Kindle products are mostly applauded for their vast and diverse library ecosystem. Its store offers the most titles available for an eBook store, with most modern publishing author making the softcopies of their work available through the Kindle store.

The drawbacks of Kindle eBook readers come from the lack of third-party software support of the devices – and the Kindle Oasis is no exception. While in-store purchases are convenient and plentiful, Kindle devices fail to support ePub files and Adobe DRM, the most commonly used eBook file types in the industry. Instead, Amazon uses its own native formats and requires users to convert third party file types to Mobi files to use, making it a tedious and sometimes clunky process.

Some might make the case of Kindles supporting PDF files, but eBook readers are notoriously bad at handling PDFs. There are even eBook readers that have no zooming option, treating that book you just bought as a picture you can’t zoom in on, leaving you to squint your eyes to try and make sense of the tiny, tiny text.

This isn’t much of a problem to Kindle users due to the industry benchmark that is their eBook store, but if you’re the adventurous type of reader who hunts for limited titles, it may be better to look at a different eReader. Otherwise, sit back, hope that it’s available in the store, and enjoy your books.

Reading is a breeze because of the sharp and well-balanced contrast between the text and the lit screen. The Kindle Oasis features the same crisp and clear resolution as the Kindle Voyage. While they got rid of the adaptive light sensor—which is a loss for heavy night reading—Oasis users still take pride in its lighting system.

The Kindle experience includes seven typefaces the reader can choose from, including the highly praised Bookerly and Ember fonts, both designed by Amazon for screen reading. Aside from the font faces, font size, line-spacing, and margins are all customizable. As such, you’ll never have to strain your eyes reading again.

Reading with a Kindle eReader is such a delight. Among the upgrades is a home screen that shows off a modern look. It displays your current book alongside recommendations from Amazon and Goodreads without cluttering your screen.

The Kindle Oasis’ user interface is clean and intuitive. A quick settings panel gives you easy access to the device’s airplane mode toggle, sync settings, brightness setting, battery levels for both the charging cover and the device itself, and a launch button for the full settings menu.

On top of that, the Kindle Oasis’s refresh rate is quick to respond for an e-ink screen. The Oasis also throws in access to Wikipedia and the Kindle store. Plus, it also features Whispersync, which allows the reader to sync an eBook’s audio companion. With it, you can switch between reading and listening to your current book without ever losing your place, which is great for long commutes or when you need to rest your eyes for a bit.

But it can be said that the best features of the latest Kindles is the flawless Smart Lookup – which, of course, the Kindle Oasis has on tap, too. Ever forgot who that minor character is? Don’t know what a quixotic character is? Just tap on a word and Smart Lookup will do the rest. Oh, and what you’ll absolutely love about it is that the info they show on a character or an event fills out depending on how far you’ve progressed in reading, so you’ll never have to think twice about accidentally getting spoiled.

Unfortunately, the Kindle Oasis that offers free 3G connectivity is only feasible in the US. But hey, if you live within the borders of the U.S., you can milk out that feature for all its worth. However, know that the3G capability is somewhat limited; access to Goodreads and other websites outside Wikipedia and the Amazon store still requires Wi-Fi.

Unlike previous Kindles, the Kindle Oasis sports 10 LEDs on its sides rather than from the top or bottom of the screen, making for a brighter, more evenly-distributed glow. You can also see that the Kindle Oasis has more LEDs lining the screen compared to its predecessors. Meanwhile, it sports the same 1448 x 1702 resolution and 300ppi pixel density of Kindles like the Voyage and the Paperwhite. So even though the added LEDs make for a brighter screen, the differences in text and image clarity aren’t really night and day when compared to Amazon’s cheaper offerings.

The Kindle Oasis may not have the Voyage’s ambient light sensor, but it does have an orientation sensor. The Oasis switches its orientation depending on how the reader holds it, which means you can switch which hand you grip it in. Definitely comes in handy while you’re reading in bed.

Speaking of grip, the Kindle Oasis has a uniquely shaped grip that balances out the weight of the eReader into your palms and tapers outward, which resembles the feeling of holding the spine of a book.

The tapered design melds seamlessly with the charging cover, which can extend your reading time from weeks to months of casual reading without having to stick around a charging station, making the Kindle Oasis the perfect travelling buddy.

Like the Kindle Voyage before it, the Kindle Oasis also has physical page turn buttons. The page turn buttons line the grip and automatically re-orients itself according to how you’re holding it. In fact, the Oasis responds more quickly to the change via the physical buttons, which will no doubt please you if you’re one to speed through titles.

Okay, so by this point it’s clear that one of the features the Kindle Oasis prides itself in is its charging cover. However, you may notice that the otherwise well-designed charging cover doesn’t protect its back – at least, not entirely.

This is concerning because despite the hefty price, the Oasis isn’t waterproof nor dustproof, a feature that you’d come to expect from something so expensive. Definitely hold out from bringing it to the poolside lest you wish to see your money go down the drain.

What's the Verdict on Kindle Oasis?

The verdict is unanimous: the Kindle Oasis is one of the best luxury eBook readers in the market. Thanks to its bright, crisp display, smart design, and solid battery life, the reading experience it offers is simply sublime. But the value? Nothing short of highway robbery. Getting a Kindle Oasis would be a solid purchase, but maybe wait for prices to get knocked down before reaching for your wallet. At nearly $300 for the base price, which means you get ads whenever you aren’t reading, this is one of the priciest eBook readers around. A better recommendation: if you can live without the extra bells and whistles, the Kindle Paperwhite is still the best bang for the buck eReader out there that performs just as well as the Kindle Oasis.