As many of you might know, Kobo is the last company that continues to actively keep Amazon’s Kindle devices in check.  Kobo’s arguably managed to survive by continuously improving their design and adding new technologies. Interestingly, the Kobo Touch 2.0 feels more of an incremental upgrade than an outright successor to the previous model. That said, while it doesn’t have the bells and whistles of the higher-end Kobos – like, say, a crisper, front-lit display – it still makes for a great entry-level eReader. It can even be said that it’s one of the best budget eReader in the market, owing to its open support of ePub and Adobe DRM files. But is that really the case? Read on to find out! 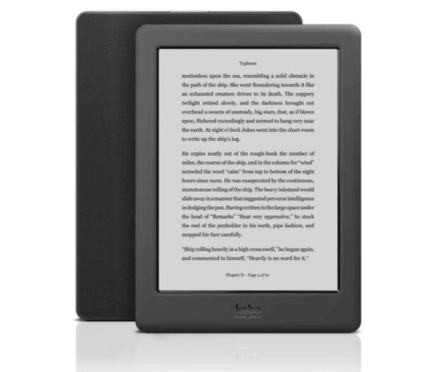 Price-wise, Amazon almost always offers cheaper books bought from their store compared to books bought from the Kobo store, but unlike its major competitor, Kobo’s support for the most widely used eBook formats allows readers to get their books from anywhere—even for free, if you know where to look!

If you don’t mind waiting after the hype of a title’s release dies down, you can also score great deals with the Kobo stores. Kobo often offers loads of coupons for their store, but this mostly carries over to non-agency books (read as: when your beloved author isn’t actively promoting the book with publishers through their agents anymore).

A slight caveat to Kobo’s rather liberal ecosystem is that they apparently extend the same freedom to publishers. As a result, not all eBooks sold in the Kobo store are Adobe Digital Editions compatible, which means that you don’t always get a separate .ascrm download. While most of them do have it, it certainly wouldn’t hurt if Kobo can add a way to let users know if an .ascm will be offered before purchasing a book.

Oh, and here’s a treat: if you’re a die-hard fan of a certain genre publisher, there’s a good chance you’ll be able to buy your copy from them directly and help them continue to generate the kind of content you like.

When it comes to readability, Kobo’s got you covered. Unlike most of the eReaders out there, Kobo offers a great degree of customizability to how you want to read. Comparing Kindles and Kobos shows that Kobo has more in the way of customizability than Kindle, manifested in a variety of font faces, the ability to fine-tune font weights, and control the content alignment.

The Kobo Touch 2.0’s reading interface, meanwhile, is structured much like your average book: with the title of the book/chapter in the header and the page number at the footer. You can also dog-ear pages and the like to give off the reading experience of a physical book. But hey, if you’re not a fan of the space wasted by the headers and footers, there’s an easy enough way to get rid of them.

While its reading tools aren’t as robust as Kindle’s X-Ray feature, Kobo still has a lot to offer. The user interface is clean and intuitive. Kobo pulls up recommendations, reading progress, list books by file type, and much more. You can even set how often you want your screen to refresh per page turn.

If you’re a reader, chances are that you’ve played with the thought of writing. Which is great! All renowned writers started out as nothing more than a kid with a book. Bridging the gap between passively reading, actively writing, and actually publishing can be daunting, so Kobo decided to offer a way for users to self-publish their own eBook with their Writing Life service.

The customers have spoken: PDFs still suck on any eReader device that dares try accommodating it. The Kobo Touch 2.0 in particular has received some rather negative attention from users. One such reader was dismayed over the bugs that come up with PDF files on the Kobo Touch 2.0. Pinching and zooming into the content pixelates the screen and flashes sporadically regardless of file size. If you are looking for an eBook reader for perusing your PDF files on, this isn’t it.

Here’s a bit of perspective before diving in. The entry-level Kindle (with special offers – or ads) costs $79.99, comes with a resolution of 167 ppi and has no front lights. The Kobo Touch 2.0, meanwhile, will cost you $89.99 with the same 167 ppi screen and no front lights. Both screens have a darker display and all-together worse resolution when compared to the next eReader up their line (the Paperwhite for Kindle and the Aura for Kobo).

The lack of built-in lights mean both eReaders are useless in the dark, so chances are you’d like to spend a little more for the front lights. But if you’re looking to save as much money on you can by sticking to one of these entry-level devices, you’re better off with Kobo’s more open ecosystem.

A small caveat though: the screen of the Kobo Touch 2.0 is sometimes prone to ghosting. This is where traces of text from the previous page tend to “bleed through” the current one. It’s not a huge deal – compromises had to be made for Kobo to deliver on this price point, after all – but it is still distracting.

Among the updates Kobo made on the Kobo Touch 2.0’s design is the removal of the raised argyle adorning its back. In its place is a simpler, admittedly cleaner look of a simple textured back that adds a bit more friction for a better grip. The slightly tapered sides are angled for a better grip, and in front they swapped the minutely distracting white logo in favor of a darker one, all resulting in a sleek, professional finish. Overall, no complaints here – this is a pretty good device, as far as ergonomics go.

This is a minor issue, considering Kobo’s cloud capability, but they completely removed the expandable memory on this version of the Kobo Touch. The omission doesn’t make sense – seeing as this is supposed to be an upgrade to the previous model. It feels like a step back. Plus, that’s one less thing they could hold over Amazon’s head.

What's the Verdict on Kobo Touch 2.0?

The Kobo Touch 2.0 is a good entry-level eBook reader. Its liberal eBook ecosystem brings in more meat to your device than an eReader with a locked-in ecosystem, and you can mess around your reading settings until you’re satisfied. It still doesn’t compare to the sheer polish of Amazon’s store, though.

On the plus side, Kobo makes it possible for you to find a copy of the book you want at the price you’re willing to pay. File transfers, meanwhile, are smooth and easy due to Kobo’s support, which means books you buy will always be available to you wherever you want to access them. You can even share your books with your friends and family!

You can definitely do better with the hardware, though. If you want to be able to read at night, or if you are the type to keep eBooks in microSDs for faster access across devices, the Kobo Touch 2.0 might not be for you. The Aura Edition 2 or the Kindle Paperwhite might be though. However, if you are looking for a budget eReader but are not fond of Amazon’s special offers (i.e. ads), and are not a night reader, then the Kobo Touch 2.0 should fit the bill. Just don’t expect more from the device – you get what you pay for, after all.