With nearly a decade of experience under its belt, ExpressVPN has become one of the best virtual private network service in the business. The company hosts a vast network of secured VPN servers worldwide, which makes finding the best connection dead easy. On top of that, users can enjoy unlimited bandwidth with zero throttling issues. And for those who own multiple devices, ExpressVPN is compatible with a wide array of operating systems, such as Windows PC, Mac, Android, and more. What else can this veritable Swiss Army knife of VPNs do? Read on!

ExpressVPN has garnered quite a reputation for themselves since launching eight years ago, but who are they exactly? Get to know more about one of the industry’s leading VPN providers below:

One of this author’s few criticisms against ExpressVPN is their premium price tags. Make no mistake, the company justifies the monthly cost by offering top-tier features and an excellent service (more on these later). However, it won’t come as a surprise if some people find the price tags a little cost-prohibitive—especially for a service that’s not really required per se for browsing the internet.

What makes ExpressVPN’s prices a bit easier to swallow is the fact that monthly costs get discounted the more months you choose to subscribe to. But if you don’t want to subscribe for 6 or 12 months, it’s certainly going to be one of the more expensive options around. At least ExpressVPN throws in 30-day money-back guarantees for all of its plans so you can get a full refund if you are unsatisfied with the service. Kudos to them!

Check out ExpressVPN pricing plans below:

Check out the all the accepted payment options below:

The best VPNs are those that offer options for mitigating slow connections. One of the ways to do just that is by hosting multiple servers and allowing users to cherry pick which ones work best for them. In this regard, ExpressVPN outclasses many of the competition. To date, they host at least 2,000 servers across 148 cities in 94 countries. This means that you can easily pick the nearest server to you to get the best connection possible. 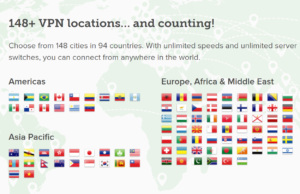 How is the Performance of Their VPN Servers?

Having multiple servers is well and good, but how does ExpressVPN actually perform? Suffice to say, this is one of the fastest VPNs around. You still have to pick the best server relative to your location first, but with ExpressVPN rocking thousands of servers all over the globe, that shouldn’t be an issue. Plus, you can always use the built-in speed tester to easily check which servers can give you optimal connection speeds.

Netflix binge watchers rejoice! To sweeten the deal, ExpressVPN also throws in unlimited bandwidth and promises not to throttle your connection. That means you can stream HD content without any issues, while getting access to geo-restricted content! It is definitely one of the best VPNs for streaming aficionados. And if you’re looking to download files via P2P file sharing, ExpressVPN also allows torrent downloads with zero restrictions on all their servers.

And speaking of restrictions, ExpressVPN manages to circumvent censorship in countries where a lot of VPNs have failed to do so—like China or the UAE, for instance. Plus, not many VPNs can stream videos or download files via P2P without experiencing performance dips or throttling issues, so it’s really a testament to how well-optimized ExpressVPN’s servers are for speed and reliability.

How Secure is ExpressVPN?

Speed and unlimited bandwidth aside, what makes ExpressVPN even more attractive is their industry-leading security. Sessions are secured via 256-bit AES encryption and DNS/IPv6 leak protection, while split tunneling allows you to route select devices to the VPN while allowing the rest to access the internet normally.

ExpressVPN also offers a handy kill switch feature that will automatically stop all internet traffic from going in or out of your device in case a server fails. Even the best VPNs falter from time to time—nothing is perfect, including ExpressVPN. But thanks to this feature, you won’t have to worry about any sensitive information getting exposed.

But the icing on the cake is the fact that ExpressVPN is based in the British Virgin Islands. Why is this important? Thanks to the lack of data retention laws there, you can expect your internet sessions to be as private as can be. That means zero activity and connection logs. And, more interestingly, it’s beyond the jurisdiction of many major countries.

What Devices are Supported?

ExpressVPN works on a wide variety of devices, and it is certainly one of their strong suits. They offer native apps for Windows, Mac, iOS, Android, Linux, Blackberry and even routers. Plus, they also have browser extensions for Chrome, Firefox and Safari. And, as if that wasn’t enough, they also support Apple TV, Kindle Fire TV, PlayStation consoles, Xbox consoles, a wide range of smart TVs, and Android TV boxes.

How Many Devices Can I Connect to ExpressVPN?

Here’s the rub: only 3 devices can be simultaneously connected to the VPN per account. If you try to connect a fourth device (or a fifth, a sixth, and so on), it will simply not connect. No need to worry about any extra charges.

If you plan to provide VPN for a family of four or more, you will either have to get more subscriptions or install ExpressVPN on your router. The latter solution will only work if you have a supported Linksys router model though, otherwise you will have to pay for more subscriptions.

In addition to the ones previously mentioned, here are several more features offered by ExpressVPN:

Support is extremely crucial when it comes to VPN, so it’s a good thing that ExpressVPN excels in this regard. With a very meaty FAQ and a website that is filled with good-to-know information, it’s easy to get well-acquainted with their service. In addition, they also include various informational videos and set-up tutorials to make new users’ lives much easier.

Most importantly, ExpressVPN’s live customer support is top notch. The best way to reach them is via live chat, where knowledgeable agents are quick to respond and attend to your inquiry. If you don’t want to talk one-on-one with a live agent, you can also reach them via email. It’s just a shame that phone support isn’t offered though. Still, the live chat seems adequate enough.

What's the Verdict on ExpressVPN?

While subscriptions are pricey and simultaneous connections are limited to 3 (unless you use a supported router), ExpressVPN proves that you get what you pay for. Thousands of servers, blazing fast connections, unlimited bandwidth, zero restrictions, secure sessions, the works. Browse safely, bypass censorship, unlock geo-restricted content and more on a wide array of devices! As far as VPN providers go, ExpressVPN is the best option for various uses.