For optimum speed, performance, and even search engine rankings for your offshore hosting, check out EDIS. The company has 19 different server locations for you to choose from, so that you can get the best physical base for your websites whether you're in the US, Europe, or Asia. You can opt for shared or VPS hosting, with the latter available through either OpenVZ or KVM virtualization. You get some great extra features like DDoS protection for added security, but that doesn't erase the disadvantage of having resource caps or feature limitations with some hosting plans. EDIS also doesn't have uptime or money-back guarantees, which are major downsides considering the company's long contract terms. 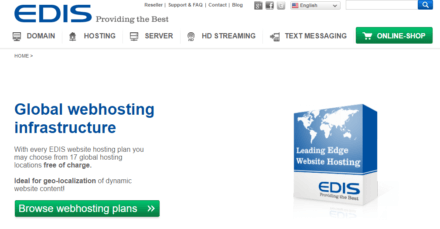 EDIS has six shared hosting plans for you to choose from, all of them with a minimum contract term of one year.

The notion of a free plan might sound tempting, but it really doesn’t come with much. EDIS offers it with any new domain name you register through the company, and it gives you 1 MB of webspace and 1 email account with 10 MB of space. This is the plan for you if you’re only looking to host a static homepage or profile online, but anything more complex than that and you’ll need to go for EDIS’ paid plans.

Here’s a look at what you’ll get if you do choose to pay:

All plans come with unmetered traffic and the option to choose your server location from among EDIS’ numerous data centers. There are 19 areas available for shared plan subscribers, spanning the major North American, European, and Asian regions: there’s Chicago for the USA; Kowloon, Hong Kong for Asia; and numerous cities all across Europe.

Each plan also comes with PHP and MySQL support, as well as popular applications like various CMS (WordPress, Drupal, Joomla, etc.) and shopping carts (osCommerce). As you’ll notice, though, key functionalities like postgreSQL support and secure account access via SSH is limited to certain plans.

Some Downsides to Note

Two of the big disadvantages of EDIS’ plans are clear from the table above: resource and feature limits. Though these are decent plans overall, it’s still disappointing to have no choice but to purchase higher-priced plans just to unlock standard features like SSL availability. Plus, while EDIS is by no means stingy with its resources, the company still lags behind competitors who offer unlimited storage and/or bandwidth with their similarly priced plans.

Another disadvantage that might be of concern to you is the long contract term. While EDIS uses monthly rates for its advertised prices, the company requires any new registrants to take a minimum contract term of one year.

You get a wealth of options with EDIS’ VPS hosting plans. For starters, the company lets you choose between OpenVZ and KVM virtualizations. What does this mean for you? If you need Windows-based hosting, you can get it. Linux is the typical OS for most web hosting providers, and OpenVZ virtualization only supports versions of Linux; however, KVM supports other operating systems, so you can install Windows, FreeBSD, or any other system of your choice.

As with the shared hosting plans, you can ask EDIS to use your preferred location as the base for your virtual private server. There are tons of choices here, from servers located in Western European territories (Austria, UK, Isle of Man for truly offshore hosting, etc.), to US sites (e.g., Chicago), Scandinavia (e.g. Sweden, Iceland), Russia, and even Chile, Israel, and Hong Kong.

What this means is you can place your server in the area nearest your target market/s. Doing so gives you lower latency and generally faster network connections, but there’s another advantage as well: higher search engine rankings, since your site will be hosted in the same locale.

Prices range from $5.43 to $54.38, with EDIS offering around 8 hosting plans per location. Specifications for each plan give you a whole range of resources: RAM goes from as low as 512 MB to 4 GB, while storage goes from 2 GB to 45 GB. You’ll also get at least 1 dedicated IP address, unmetered traffic, and Gigabit uplinks.

From the Basic plan upwards, you get SSH access and encrypted connections to your account. Better yet, EDIS includes firewalls and antivirus, DDoS protection, anti-spam filters, and 24/7 monitoring for networks and servers, all free of charge.

You’ll also get daily backups of your account, server, and website data, though you’ll have to pay service fees for any restores.

All of EDIS’ hosting plans use servers running on Intel Xeon processors and equipped with SAS RAID storage. Add to that I/O maximization and EDIS’ caching systems, and you’re assured of blazing-fast site loading times and smooth simultaneous request handling at all times.

However, EDIS doesn’t offer any uptime or money-back guarantees, so you don’t have any clear downtime compensation or refund policies to fall back on if needed.

Customer support is available through phone hotlines and EDIS’ support ticketing system, though note that only higher-priced plans receive phone support. There’s also a FAQ on the company’s website, but this doesn’t help much with anything beyond very basic questions.

What's the Verdict on EDIS?

For the best provider in terms of global server location choices, look no further than EDIS. With server locations spanning four continents, you can be sure to find the ideal base to deliver unmatched speed and performance to your target markets. The range of options also extends to the hosting plans themselves, since EDIS lets you choose among shared and different types of VPS hosting. However, resource caps, the lack of uptime and refund guarantees, and long contract terms are significant drawbacks, so consider carefully if EDIS is the best choice for your needs.